Subeta: Paving the way for microtransactions 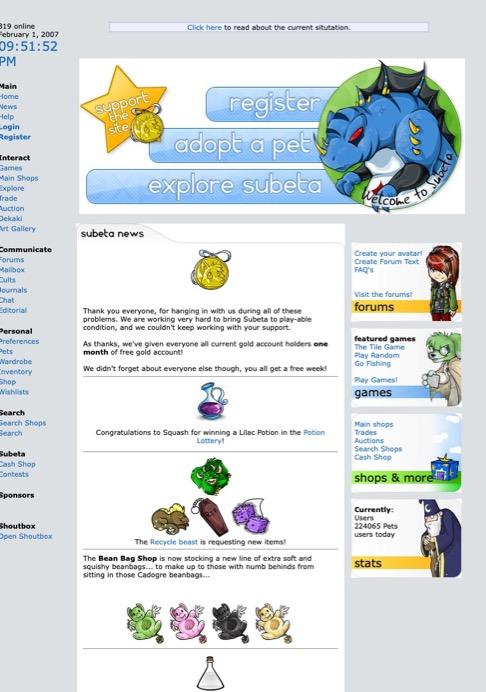 This is part of a series of posts on building Subeta, an early virtual pet game I made as buta teenager. Subeta was also one of the first pioneers of what is now called micro-transactions, but to me it was just getting quarters in the mail to pay for something I loved making.

I created the virtual pet site Subeta in 2003, when I was 13 years old. I'd been around virtual pet sites for years, and after the first few puzzle plots on Neopets I wanted to learn how to program something similar. Obviously, I started by making visual basic programs to cheat on Neopets, which led to me getting permanently banned. The next obvious step was building my own virtual pet universe, so I found a partner on livejournal, built an authentication system with the ability to adopt a few early pets that we drew, and invited friends from school computer class. It is not hyperbole to say that it took off overnight -- we hit 1,000 users the first month.

Subeta was my outlet to be creative and build anything that I wanted to see, and have people immediately interact with it and demand more. Taking the cue from Neopets, I created the first plot 1 in that first year, in addition to an in-game stock market, pet battling with complicated formulas for determining damage, and more. If I had an idea, I could make it happen.

Subeta was easy to run for the first six months, on a small $10/month shared PHP hosting service (shoutout cPanel!) that I used my allowance money on. It started using all of the shared resources (sorry to anyone else using that service!!) and we got booted 🥾. I scrambled to save the site that I loved, and put up a PayPal donation button with a "sorry I'm 13 and figuring this out!!" message and circled up with the team2 to come up with a quick plan to start taking money once the site was at a new home.

Subeta made it through that time, and the following 17 years, through the magic of ✨ micro-transactions ✨. Other online communities like GaiaOnline and HabboHotel were innovating in similar ways with small individual payments. Neopets took a different route (in addition to indoctrinating children to scientology3) and created ad-based gated content, and worlds that you could only explore if you watched videos or interacted with sponsored content. I wasn't capable of inking multi-year deals with corporations as a teenager, and so set out as an early pioneer of the micro-transaction route.

This originated with players sending envelopes of cash and change taped to index cards to my parents house. My mom was sure I was getting up to something shady online, but no, just selling digital goods 😇. My sister and I would sort through stacks of envelopes, trying to decipher the hand written usernames attached to $5 in quarters. We had one player (Who later went on to become a moderator, and a kind of mom to the community) that would send me a box filled with things from hot topic (the only store to me at the time) and fuckloads of glitter, with the small amount of cash for the stuff she wanted. These early players shaped how I see the power of community beyond just posts / likes / $$$ and instead in the power to forge lifelong friendships. I know that sounds cheesy, but my best friend is someone I met on Subeta and she is now the creative director.

We had three types of “donations” available in the early site (2004): 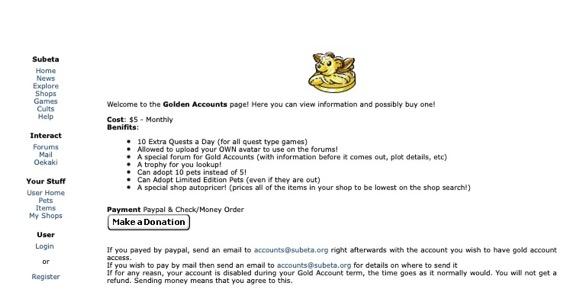 One of the main pulls for players, especially converts from Neopets, was being able to build custom profiles for your pets. One of the features we created early on was adding items to your pet profiles in their “treasure”, as another way to show off the personality of your pet. And having custom items that were made for that pet or player made the treasure even more compelling. These items ranged from special books, beautiful minions (friends for your pet) and weapons that weren’t more powerful than the ones available for free. 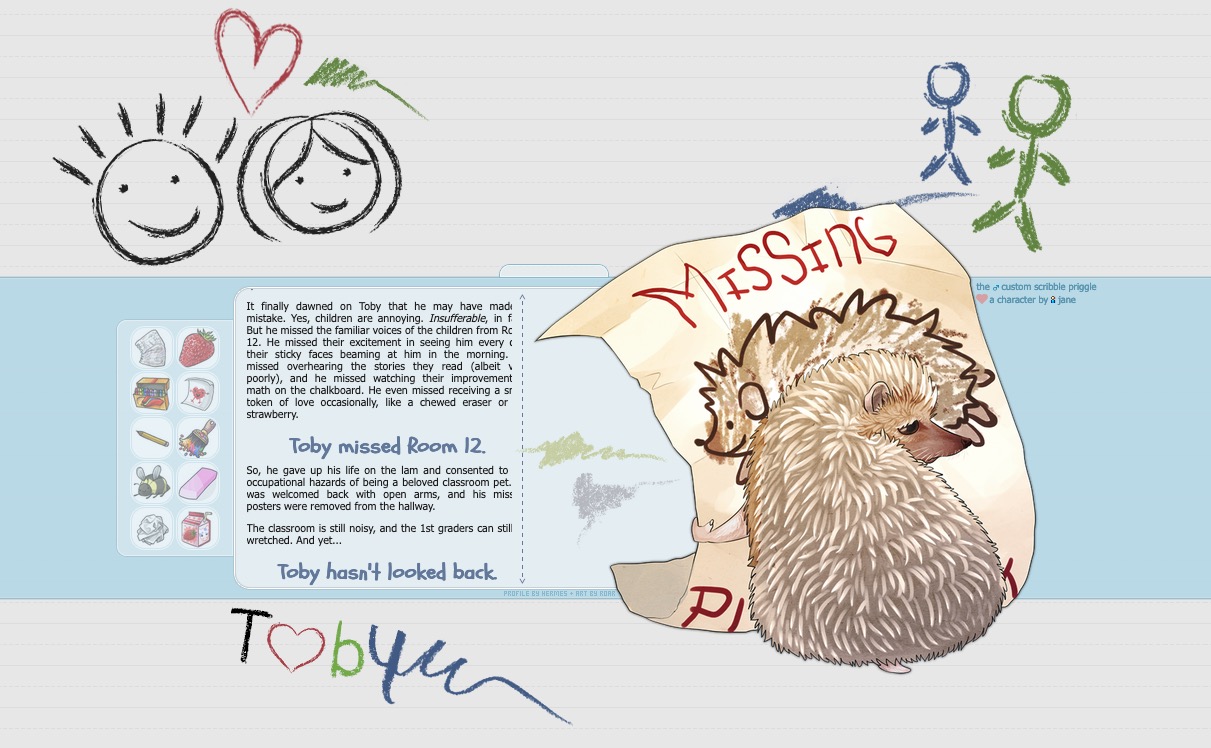 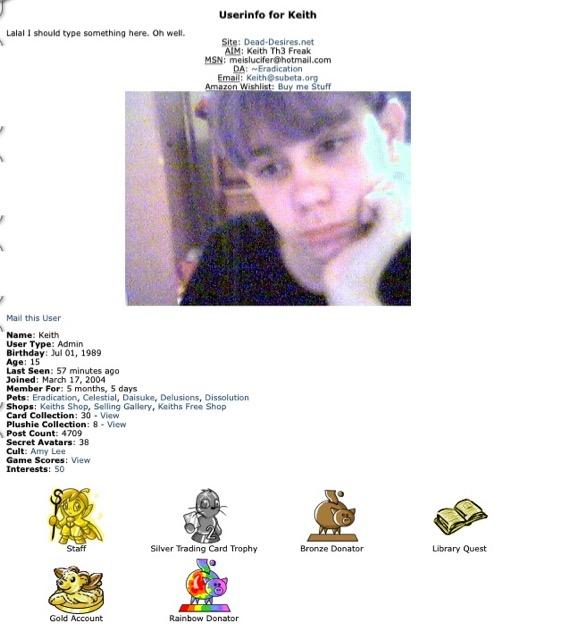 So much of my childhood is just available to view on way back machine, truly horrifying. This is an example of the Bronze & Rainbow trophies, but on a boring, non-customzied profile by someone with a complete lack of creativity.

Coming from a family that had trouble with money, I could predict that based on the type of players we attracted it would be dangerous to allow anyone to spend too much each month. I knew that some of our players were on fixed incomes and would spend more to feel richer online than they could in real life. This became more and more clear as micro-transactions popped up in other places like Farmville, which existed entirely to get as much money from the player as possible before they quit. Farmville brought micro-transactions into the mainstream, and got a reputation for going after “whales” who would spend hundreds or thousands of dollars on micro-transactions a month. Demographically these were typically women in their  30s and 40s who were turning to online games in much the same (although discussed in a completely different) way as men were turning to games like World of Warcraft. Amassing virtual wealth that would last forever and something you built continuously on was the promise of long running MMORPGs and games like farmville.

Subeta could have pursued the path of taking as much money as possible, but that wasn’t the community we wanted to build and we even got offers from large corporations but felt that taking their money would surely result in pressure to grow profits at any cost and that wasn’t compatible with the Subeta I envisioned. I didn’t have to worry about where food or electricity was going to come from ever again thanks to Subeta, and couldn’t bring myself to turn it over.

In order to keep growing the site and keeping it sustainable, we had to come up with a better system than “send me money in the mail and write down what you want”. So, we created the Cash Shop Credit ($1 = 100CSC). Players could buy a new currency specifically for Cash Shop purchases like Gold Accounts, Monthly Collections and profile medals. This grew to include a special Cash Shop only pet “color” called Angelic that started at $30, today it’s 750 ($7.50) Cash Shop Credits.

With more complexity came the need for setting base guidelines and values. So, I came up with Keith’s Principles of Ethical Micro-transactions™️. It boils down to trusting the players that could to keep giving their hard earned money to us, and for the ones that couldn’t we weren’t going to make Subeta unplayable.

The one week gold account is still the go to free gift if there is significant downtime or errors on the site, or the team just wants to give everyone a little boost. No paying Gold Account users complain that it is taking something away from them, or making their gold accounts worth less, because we’ve built this kind of thinking into the community. 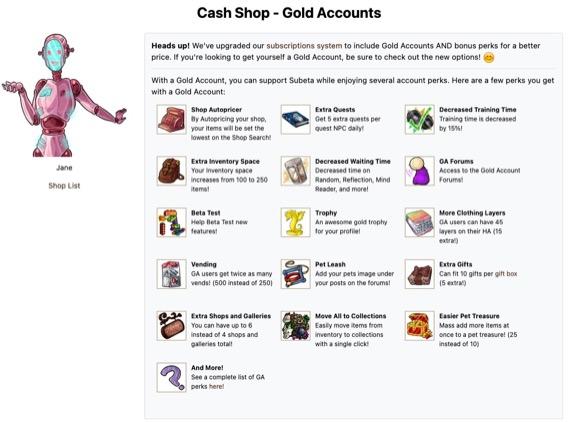 When we added Human Avatars to the site in 2008, and the largest avatar site after Gaia Online, we really strived to ensure the quality was incredibly high and the value for buying an entire set felt like you were really getting something of (digital) luxury. This was really important because kids were spending their real money on it, and had competitions for building these beautiful avatars. A set of Delish (the in game name of the luxury designer) items cost 1,500CSC.

Entire fan sites like style-file popped up to catalog these lewks and having the most recent fashion became a major part of the game for some players. It was still important to make sure that users who couldn’t spend money had access to these sets, so they could buy CSC from other users for sP and then buy the sets themselves. 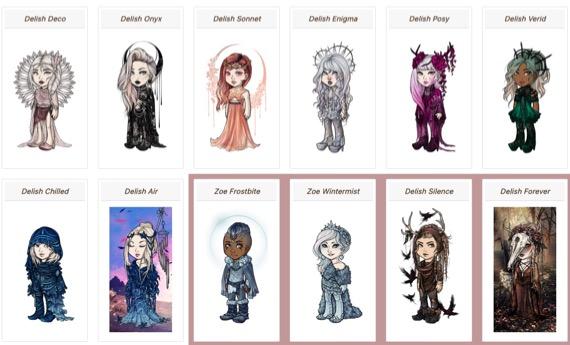 On Subeta today, the most common thing to spend cash on is the “Custom Clothing” system, which allows players to upload their own items to be used in the dress up wardrobe feature. Those items get put into the users shop, where they can choose the price they sell it for in CSC and make a sick (on site) profit if they want.

We investigated allowing a payout to the creator in USD, but in the amounts we’re talking about (usually tens of dollars) it was never economically viable to set up. And players and creators felt that it would turn Subeta into a place to make money, like Second Life had become.

The range and talent of the creators making these items is still astounding to me. If you want cyberpunk items, someone has made them. Fursuits? Someone has you covered. Princess items for masculine avatars, check.

Players who started making custom clothing on Subeta have gone on to become indie game creators and actual fashion designers. It gives creators an outlet for creativity and passions (like an entire 80 piece set of Lord of the Rings… inspired… items) and creating community around their creations that didn’t exist at that time on the internet.

With all areas of the site we are always looking to lower the prices and make them more approachable, Subeta recently did that for the custom wearable feature! 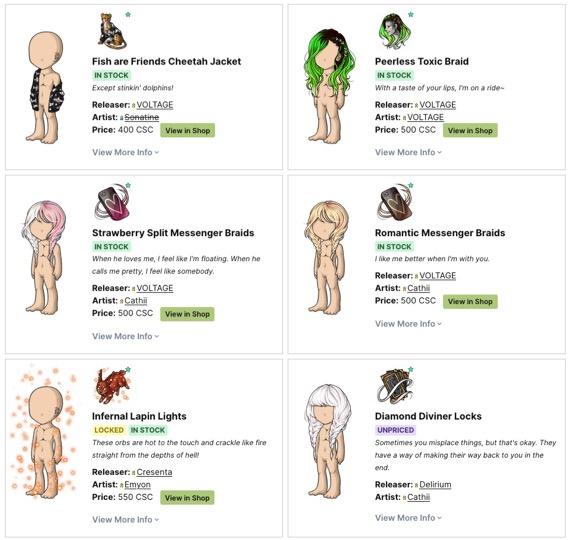 Example of items drawn by the user

This is part of a series on building Subeta, one of the earliest and largest pet sites on the internet. The next post will be on building a community centered around free speech, especially compared to Neopets where you could get banned for saying “gay” even referring to yourself, and free expression, and how to deal with an aging playerbase, and gracefully (I hope) handling the death of popular and loved players in a tight knit community.